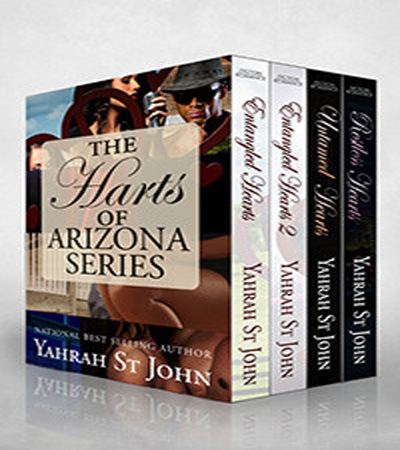 Get the entire series all at once! Save a few dollars and never have to put down one book to get the next. Read right thru to see how Chynna James fairs in life and love.

As America’s favorite singer, Chynna James has it all, beauty, fame and wealth, but being in the spotlight is not all its cracked up to be. Chynna feels like she’s missing out on life and wants to break free. A chance encounter with sexy, widowed rancher Noah Hart has Chynna singing a new love song.

Living in her twin’s shadow has been a way of life for down-to-earth actress Kenya James, but when Chynna’s mishaps land her in hot water with the press, Kenya steps in to bail her out. The twins concoct a scheme to trade places, allowing Kenya to take center stage. But Kenya gets more than she bargained for when she tangles with Lucas Kingston, the attractive owner of Chynna’s record label. Little does she know that his business partner just might be on to her.

What will the charade mean to the twins’ burgeoning romances? Find out..

Mega superstar singer Chynna James has found the voice she’d forgotten and the love she’d always craved with widowed rancher Noah Hart on his family’s sprawling ranch. That’s before the paparazzi catches wind that she switched places with her twin.

Talented actress Kenya James is enjoying walking in her sister’s shoes and all the glitz that comes with it, but she never bargained on falling for Lucas Kingston, the owner of Chynna’s record label or that her every move is being watched.

Chynna and Kenya learn that all that glitters isn’t gold when they face off with the press and those who threaten their newfound independence. Can they keep their sizzling hot romances afloat amidst all the lies and deception? And can love and fame exist in the same place? Discover if true love prevails…

An untamed heart… RYLEE HART has always been unconventional, choosing veterinarian medicine over the traditional role of rancher’s wife and mother. To appease her parents, Rylee accompanies her father’s perfect pick for a spouse to the Kentucky Derby, but the match generates no sparks. But the moment she steps foot on the hallowed grounds of the Derby track and meets sexy billionaire and media tycoon Amar Bishop – a sheik’s son, all bet’s are off. Amar makes his intentions clear; he intends to have her…even if it means annihilating the competition. A disarming prince… Cast-off by his father as illegitimate, Amar spurned love and chose casual flings, until he encounters alluring Rylee Hart. But Rylee rejects his advances not eager to be one of the noble heir’s latest conquests, which only fuels the playboy’s desires. When Amar finally claims her, he vows to possess her. But when family tragedy strikes Amar and duty calls…will it signal the end of their love affair? Or the beginning?

Ruggedly sexy bull rider CALEB HART is a proud of his carefree lifestyle. He’s thrown when he meets debutante ADDISON MONTGOMERY at a bachelor party in Vegas and has an overwhelming desire to protect her. Powerless to resist her sweet allure, they embark on a passionate, commitment-free affair. Caleb never expected a woman could break through his defenses, but Addison does – until a fall off a bull leaves him temporarily paralyzed.

ADDISON falls hard for the smoldering cowboy with the bedroom eyes who makes her feel like a woman. She’s devastated when Caleb pushes her away. She retreats, vowing to start her life anew. She never expected years later, Caleb would reel her back in with his sizzling hot kisses, reawakening the passion they once shared. Can she trust her heart again or is she headed for heartbreak?